When it opened at the Royal Court Theatre in London in 2010, “Posh” helped to give a real boost to the careers of its young cast, with actors including Kit Harington (“Game Of Thrones”), Joshua McGuire (“The Hour”), Tom Mison (the upcoming “Sleepy Hollow” TV series) and David Dawson (“Luther”) all having gone on to great things after the fact. “An Education” director Lone Scherfig signed on to a film adaptation recently, and it looks like we might be seeing a movie cast that’s just as broad in talent, with a few rising names, and one massive one, apparently in various stages of talks to come on board.


According to the ever-on-the-money Baz Bamigboye, Max Irons, Sam Claflin and Douglas Booth are all in negotiations to star in the film, and while talks are at an earlier stage, “Twilight” megastar Robert Pattinson could potentially join them. Nurse, my ovaries! If the first three names don’t quite ring a bell yet, Irons is the son of legendary actor Jeremy Irons, who previously appeared in “Red Riding Hood,” and has “The Host” coming up shortly. Claflin has a couple of blockbusters under his belt already, with “Pirates of the Caribbean: On Stranger Tides” and “Snow White & The Huntsman,” and has “The Hunger Games; Catching Fire” coming up later and the year. And Booth, who was one of our Actors On The Rise picks earlier in the week, starred in the TV version of “Great Expectations” recently, and has “Romeo & Juliet” and the Wachowski’s “Jupiter Ascending” on the way.

The play, and the film, revolves around a version of the Bullingdon Club, an Oxford University institution (not unlike a fraternity) which included current Prime Minister David Cameron and current Mayor of London Boris Johnson among its members, and which involves privileged idiots getting together, drinking themselves into oblivion and trashing restaurants. Wade’s play focuses on the members of the Riot Club, whose meeting in a country pub ends in tragedy, and we can see all four of the actors fitting in nicely into that kind of environment.

It sounds like Pattinson’s involvement is the least concrete; he’s still filming David Michod’s “The Rover,” and he has David Cronenberg’s “Maps To The Stars” and James Marsh’s “Hold On To Me” nominally on his slate, though lord knows what state they’re in in terms of financing. But a good piece of material, amid a strong ensemble, would be a smart move for the actor as he continues to try to escape the shadow of Edward Cullen. As Bamigboye suggests, the challenge here is going to be scheduling; the nature of the piece requires the cast to all be together round a dining table for much of the shoot, and all these guys are busy and in demand, so don’t be surprise if there’s mixing and matching with who sticks with the project. Filming is planned to get underway in May, so it shouldn’t be too long before we find out who’s able to fit it into their schedules, and “Posh” should eventually open in 2014

Max Irons was on Good Day Los Angeles this morning. You can view his interview below.

Have you been itching to know more about The Host, the sci-fi romance based on Twilight author Stephenie Meyer’s latest book? Well, now’s your chance to ask.

The best-selling novelist and the film’s stars—including lead Max Irons—will be joining us on the E! News set this Friday to answer their fans’ questions. Yes, really!

Post your questions in the comments section right here or submit them via Twitter with the hashtag #askthehost.

Calling all Stephenie Meyer fans, are you excited about The Host hitting theaters on March 29? We certainly are.

To celebrate the film’s upcoming release, Celebuzz will be hosting an exclusive live webcast from the movie’s world premiere.

Why should you join in on the fun?

Aside from all the celebrity sightings, we will also be giving away some awesome prizes for our viewers.

Got a question for the cast? Be sure to include the hashtag #TheHostLive in all your tweets so we can pass along your messages to the stars.

Join us this Tuesday, March 19 for a once-in-a-lifetime chance to be front row at a red carpet premiere!

Max Irons and co-star, Jake Abel did an interview with Good Day Chicago. You can check out the interview below.

Clip from The Host: What is “it”? It’s not human
0 comments The Host , Videos 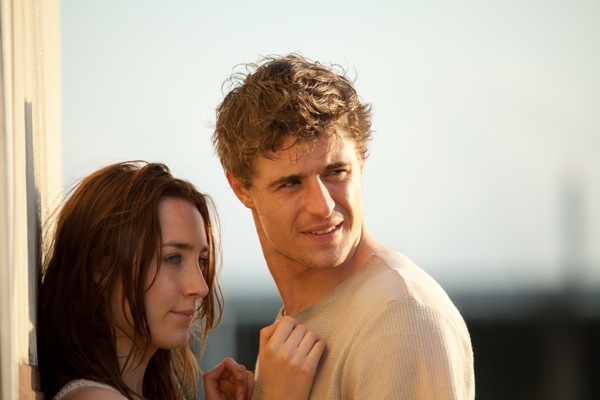 Calling all Twilight fans: In case you haven’t heard, author Stephenie Meyer of the Twilight series has another movie opening in theaters based on her best-selling novel The Host.

In this new epic love story, there’s an enemy force threatening to control mankind. Oh boy oh boy, could it be more wolves and vampires, or an alien? In this clip we learn that whatever it is, it’s not human. In protecting each other from the enemy, characters Jared and Ian disagree over the best way to act without being inhuman themselves.

You probably know by now that Rob Pattinson and Kristen Stewart are not featured in this movie. I guess the honeymoon is over with these vamps on-screen. Have no fear, there are new kids in town. Saoirse Ronan of Lovely Bones, Diane Kruger of Unknown, and Max Irons of Red Riding Hood team up in this adventure/romance/sci-fi thriller. They’re the new wave of heartthrobs to invade our minds, keeping alive Meyer’s supernatural and whimsical imagination. Romeo and Juliet never had to worry about vampires, wolves or aliens, but one thing we know for sure is that Meyer’s modern-day love stories are not PC. Her bedtime stories would go something like, “Once upon a time, there was an alien prince who rescued his human bride from the clutches of the vampire wizard.” Sleep well, kids! One day, when you grow up, you could be an alien prince in a cape, too. Meyer’s fantasy world is not your typical yellow brick road. All the more reason to watch!