Max Irons: Out of Character, but in His Element
0 comments Articles , Interviews 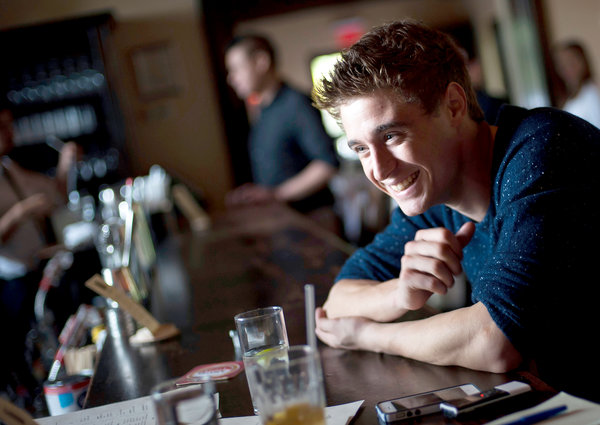 On a recent Wednesday, the British actor Max Irons accompanied a reporter to the Cloisters, the museum devoted to the art of medieval Europe. It was a setting that may have felt familiar to King Edward IV, the character Mr. Irons plays on the Starz series “The White Queen,” a lusty take on the Wars of the Roses.

Of course, Mr. Irons can claim a regal bloodline of his own: he is a son of the actors Jeremy Irons and Sinéad Cusack.

Stepping into the Late Gothic Hall gallery, Mr. Irons scoped out the altarpiece and tapestries. He admitted having done some remedial reading for his role. “There’s a fantastic bookshop in London called Foyles, and if you turn up and say, ‘I need the definitive book on Plantagenet history,’ some guy with a crutch will appear” — at this point the six-foot-plus actor with perfectly defined features hunched over, mimicked a wizened old troll waving a book — “and he will say, ‘I’ve got it.’ ”

As he made his way through the galleries, Mr. Irons, whose 28th birthday is Thursday, drew sidelong glances from other museumgoers. Perhaps they recognized him, or perhaps they were just struck by his model good looks, which at one point were featured in ads by Burberry.

Mr. Irons stood quietly in front of the famed Unicorn Tapestries, remarking on the vibrant colors, and trying to take in the story line. He noted depictions of men with shoulder-length bobs, and recalled an article in The Daily Mail (“a terrible newspaper, terrible”) that cited anachronisms when “The White Queen” was shown on the BBC. The article, referring to zippers, stated: “Howlers include costumes with zips — which weren’t invented until the late 19th century — Georgian windows and modern guttering.”

Mr. Irons wandered down a staircase, reaching the Gothic Chapel, filled with stained-glass windows, the light moodily changing as the sun was covered by clouds. He remarked on the contrast with the chapels in the series. “We had very dark, dingy, dirty chapels indeed, like the one where Edward IV prayed at one point,” he said. “It was nothing as beautiful as this.”

Stepping out into the Bonnefont cloister and gardens, Mr. Irons took in the spectacular views from the museum’s perch in northern Manhattan, and observed that it was not the kind of place where you could ask if you could smoke. He brightened considerably when he saw the George Washington Bridge. “Where is that little red lighthouse?” asked Mr. Irons, ready to chuck illuminated manuscripts and hunt for a subject of the children’s classic “The Little Red Lighthouse and the Great Gray Bridge.”

A 1o-minute stroll through Fort Tryon Park gave Mr. Irons an opportunity to indulge in a cigarette before arriving at the New Leaf restaurant. The 1930s building has granite archways and 18-foot ceilings, supported by oak trusses. Mr. Irons chose to sit at the bar, ordering a water with ice, explaining he wasn’t a daytime drinker.

He seemed quite at home at the bar. His parents had cut him off financially when he was 18, with the goal of developing self-sufficiency. It was a tough-love measure, now appreciated, which led to his working for a living. “I was the head bartender,” he said. “I was dead good. We didn’t get paid enough — we don’t get tips in England — so we would steal Champagne. Definitely put that in.”

Mr. Irons said his parents, who did not expose him to movie sets during his youth (“They kept me well out of it”), discouraged him from acting, viewing it as a difficult career path. “Then, when they saw I was serious, they backed off,” he said.

He said that his famous lineage, while helpful in drawing publicity, could be a handicap in landing acting roles. “People are wary of you when you go into an audition, certainly in the early days,” he said. “They would go, ‘Who is this little upstart?’ So you really have to bring it. Otherwise, if you don’t, they will say, ‘Oh, there he is, trying to get in on his parents’ coattails’ and they will shut you down because of it.”

Mr. Irons has just finished filming “Posh,” a movie based on a play by Laura Wade, about two Oxford University students who join the notorious Riot Club, a thinly disguised version of the real (and boisterous) Bullingdon Club. Mr. Irons stars with fellow heartthrobs Sam Claflin and Douglas Booth. Informed of an Internet frenzy over the casting (“It’s like the trifecta of hotness,” one site said), Mr. Irons laughed and said: “Wow. My God. I don’t know about any of that.”

He recently appeared on stage in London, where he lives, in the political drama “Farragut North.” This led to a discussion of the current Broadway season and the Harold Pinter plays being performed in New York. Mr. Irons is capable of being a fan himself; he praised the playwright’s controversial acceptance speech for the Nobel Prize in Literature in 2005 (“He gives the most unforgivably scathing and articulate evaluation of American and U.K. foreign policy”) and recalled seeing Mr. Pinter years ago at a restaurant near his home. (“He was not one of those people you’d go up to and say: ‘Can I have your autograph? I think you are amazing.’ ”)

He did meet the playwright several times through his mother. Yes, having famous parents does bring its benefits.

“I’m not going to lie, I’ve met Jay Z and I was equally blown away,” said Mr. Irons, warming up to the subject of meeting idols. It was at the Met Ball several years ago with his then-girlfriend, the actress Emily Browning. “Jay Z just said, ‘What’s up, sport?’ ” said Mr. Irons, who re-enacted the moment, draining animation from his face and looking completely blank and insipid. “And I just became incredibly white and English and just went ‘Nothing.’ And Jay Z went ‘All right, get money’ — which I looked into and it apparently means go make things happen — and then I said, ‘Will do.’ I like to think he’s my best friend.”

Mr. Irons got up to go. His afternoon plans centered on taking a kip, English slang for a nap, and hanging out with his girlfriend, who lives in New York. He declined to disclose her identity, beyond saying she was not an actress. And he wanted to shop. He was wearing black Saint Laurent jeans and coat and a blue Alexander Wang sweater.

“I lie to myself and tell myself buying in dollars is better,” he said.