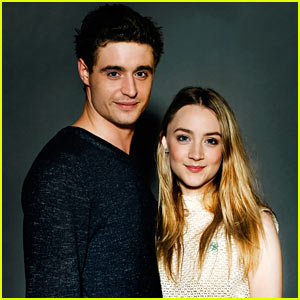 The 18-year-old actress and 27-year-old actor currently co-star in the upcoming film The Host, which hits theaters this Friday (March 29)!

JJ caught up with Saoirse and Max to get the scoop on what it was like working with each other, as well as their co-stars Diane Kruger and Jake Abel.

We also chatted about the on-set prank wars that occurred, and asked fun facts about themselves!

JustJared.com: What’s been your favorite off-screen moment of shooting?

MI: It would be hanging out in New Mexico going hiking. I like to go by myself. I get crazy on set sometimes being surrounded by people, so every once in a while I just have to get out.

JJ: Do you have a favorite prop from set?

MI: No, I didn’t steal any props. Getting to play with the guns was quite fun. But no, I didn’t have many props.

JJ: Did the guns actually shoot anything?

MI: They shot blanks if you wanted them to.

MI: Stunning. Oh, I can do better than that. Mesmeric.

JJ: Did you and Jake play pranks on one another?

MI: He’s a little sh-t. He loves playing pranks. He in fact opens pranks up to the world of Twitter. He decided to tell the world that I’m terrified of insects. We had a book signing the other day with 1,000 people, lots of whom threw plastic insects, or in some cases real insects, onto the table.

MI: The last movie I saw was Life of Pi. I loved it. I thought it was amazing.

MI: Woodkid’s new album. It was amazing. It’s a French guy. He used to direct videos for Katy Perry and write lyrics for Rihanna. He decided to make his own music. He’s f-cking awesome.

JJ: Tell us more about your upcoming TV series.

MI: It’s called The White Queen. It’s about The War of the Roses, which took place in the 15th century, particularly violent period in history and a politically unstable period in history. I play King Edward IV – a bit of a womanizer, a very intelligent guy. And it tracks him and his wife over the course of their final 20 years.

JJ: Do you have a favorite off-screen moment from filming the series?

MI: They offered to give me the horse that I rode.

JJ: Did you take it?

MI: I didn’t! Because I thought I’d be unkind keeping a horse in London. Where are you going to keep it? The poor guy’s going to be in the stable the whole time. But it was nice because I was the only one they offered.

JJ: What’s Tarquin Wong up to? [question given to us by Jake]

MI: Tarquin Wong! Where did you get that from (laughs)? He was this kid I went to school with when I was 13. He was a gymnast and a diving champion. I beat him in a dance competition, dancing to the Grease megamix with a combination of swing and break dance. At the time, it felt like my finest hour. When I look back, it makes me uncomfortable.

MI: No (laughs)! I was more flexible in those days. Now, I’m taller and ganglier.